ICAI has signed a Memorandum of Understanding (MoU) with the Kuwait Accountants and Auditors Association (KAAA) whereby ICAI would offer technical programs in collaboration with KAAA to strengthen the accounting, financial and audit knowledge base in Kuwait.

The Institute of Chartered Accountants of India (ICAI) signed the Memorandum of Understanding (MoU) with the Kuwait Accountants and Auditors Association (KAAA) in Kuwait on November 21, 2019.

Signing of the MoU between ICAI & KAAA would facilitate both institutions working together to strengthen the accounting, financial and audit knowledge base in Kuwait. Under the MoU, ICAI would offer technical programs to the employees of Kuwait Government/ Ministries/ KAAA members and Kuwait Nationals in collaboration with KAAA.

While signing the MoU, CA. Prafulla P. Chhajed, President, ICAI said “India and Kuwait share a cordial relationship, strengthened and nurtured with historical trade links, cultural affinities and presence of large number of Indian nationals in Kuwait. Considering the role that India’s Chartered Accountants have been playing in the economic growth of the country, there is a lot of scope for professional opportunities in Kuwait and a need to promote Kuwait-India business partnerships.”

Speaking at the occasion, Mr. Faisal Abdulmohsen Al-Tabikh, Chair, KAAA, expressed “The MoU will help in establishing areas of co-operation and collaboration for the mutual benefit of both KAAA and ICAI members and to enhance the reputation and influence of both institutions within their respective home countries and globally. The MoU will foster strong working relations between the ICAI & KAAA“.

On 23 October, 2019, the Union Cabinet Chaired by Shri Narendra Modi, Hon’ble Prime Minister of India, had approved the MoU between ICAI and KAAA. Earlier, the Union Government has identified the Accountancy and Finance Services as one of the 12 Champion Sectors for export promotion. ICAI is taking all possible efforts to enter into mutual recognition agreements with maximum foreign accounting Institutes, which is the first step for promotion of export of accountancy services in the overseas market.

About ICAI: The Institute of Chartered Accountants of India (ICAI) is a statutory body established under the Chartered Accountants Act, 1949 for the regulation of the profession of Chartered Accountants in India. It supports more than 3 lakh members and above 7.50 lakh active students. It has its headquarters in New Delhi and 5 Regional offices in Mumbai, Chennai, Kanpur, Kolkata and New Delhi. It presently has 164 branches spread all over the country. In addition, it has also set up 34 chapters outside India and an overseas office in Dubai.

About Kuwait Accountants and Auditors Association (KAAA): The Kuwait Accountants and Auditors Association (KAAA) was established by the Ministry of Social Affairs and Labour of Kuwait on 02/11/1973 in accordance with the provisions of Law No. 24 of 1962. It was established with the aim of developing culture and expertise in the field of Accounting in Kuwait by conducting studies, preparing research, providing advice and exchanging expertise. 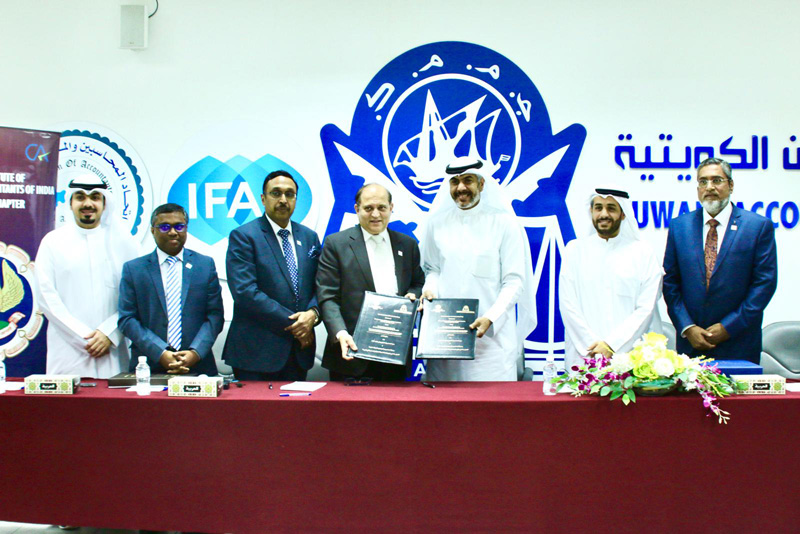 Subscribe for our Newsletter ‘CA Club Updates’ delivered thru Google Feedburner Emails and join our community of 6000 plus subscribers. To join, please click on the ‘SUBSCRIBE’ link below:

Upon clicking the link, a pop-up window will open. Please fill up your email id and verification code therein. After that check your email and click the confirmation link sent by Feedburner Email subscription.

This one time process is to ensure that you don’t get emails without your own confirmation, i.e. someone else can’t register your email here. Besides, each Newsletter will include an ‘Unsubscribe’ link to maintain your freedom to discontinue getting emails anytime.